ABOVE VICTORIA AND VANCOUVER ISLAND is a stunning collection of 105 aerial photographs of Vancouver Island, BC taken by renowned photographer, Russ Heinl. This high-quality ebook offers a series of breathtaking images, capturing aerial views of Vancouver 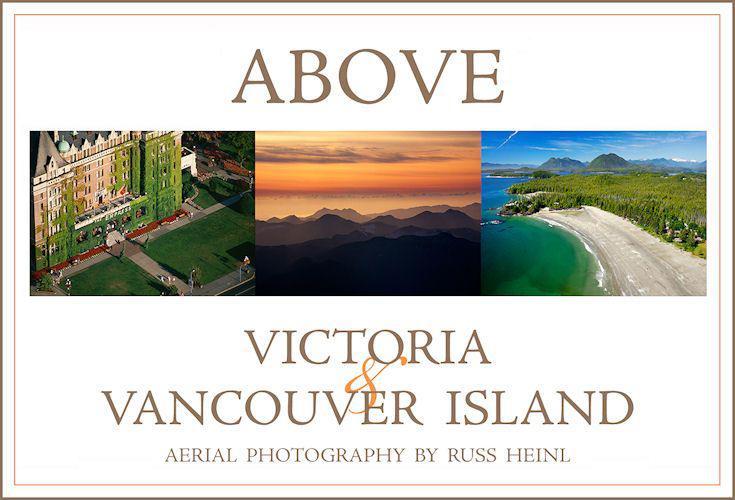 ABOVE VICTORIA AND VANCOUVER ISLAND is a stunning collection of 105 aerial photographs of Vancouver Island, BC taken by renowned photographer, Russ Heinl. This high-quality ebook offers a series of breathtaking images, capturing aerial views of Vancouver Island’s spectacular landscapes in precise detail. Heinl’s diverse subjects range from the ivy-covered Empress Hotel in Victoria to surfers riding world-class surf at Tofino and Long Beach.


Those who enjoy British Columbia’s great outdoors will appreciate these awe-inspiring aerial views of Vancouver Island’s magnificent snow-capped peaks of Mount Washington and Strathcona Provincial Park. Nature lovers will pore over the images of Grey Whales, right down to the barnacles on their tail fins as the whales complete their annual migration along the coast of Vancouver Island, celebrated by thousands attending the Pacific Rim Whale Festival.


See “The Snowbirds” flying in formation over Vancouver Island, seals basking on rocky offshore islets and a host of magnificent coastal views captured in this stunning ebook of aerial photographs. Chapters feature Tofino, Long Beach and the Pacific Rim National Park, Port Hardy and Cape Scott, the scenic waterfront at Nanaimo, Victoria, the elegant capital city of British Columbia and its suburbs of Sidney and Sooke.


Using the latest gyro-stabilized Nikon camera systems these stunning views of the earth from the air show Vancouver Island at its very best. From the open door of the helicopter, aerial photographer Russ Heinl has captured the charismatic splendour and remote natural beauty of Vancouver Island, its cities, mountains, beaches and wildlife. Enjoy these aerial views time and time again with this beautiful photography ebook of Victoria and Vancouver Island.