Nominated for the Edgar for Best Novel in 2010, Timothy Hallinan has written ten published novels, all thrillers, all critically praised. In the 1990s he wrote six mysteries featuring the erudite private eye Simeon Grist, beginning with The Four Last Things, which made several Ten Best lists, including that of The Drood Review. The other books in the series were widely and well reviewed, and several of them were optioned for motion pictures. The series is now regarded as a cult favorite. In 2007, the first of his Poke Rafferty Bangkok thrillers, A Nail Through the Heart, was published to unanimously enthusiastic reviews. "Hallinan scores big-time," said Kirkus Reviews, which went on to call the book "dark, often funny, and ultimately enthralling." Nail was a Booksense Pick of the Month and was named one of the top mysteries of the year by The Japan Times and several major online review sites. Rafferty's Bangkok adventures continued with The Fourth Watcher (2008) and Breathing Water (2009), both of which also appeared on "year's best" lists. New York Times bestselling author John Lescroart said about the 2010 book, The Queen of Patpong, "You won't read a better thriller this year," and Ken Bruen said, "John Burdett writes about Bangkok. Tim Hallinan is Bangkok. I adore this book." For almost thirty years Hallinan operated one of America's leading television consulting firms, working with Fortune 100 corporations in New York, Los Angeles, and London to focus their television sponsorship activities. He has written full-time since 2006. Since 1982 he has divided his time between Los Angeles and Southeast Asia, the setting for his Poke Rafferty novels. 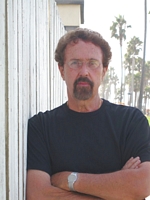