I live in Cardiff-by-the-Sea, California, with six cats, a desert tortoise, seven box turtles, and a German Shepherd, Louis, who looks something like Rin Tin Tin in his soulfulness. At night I can hear the ocean when the tides are high. When I was nine, my family moved from Ridgewood to Saddle River, New Jersey, a paradise of a town with a woods, a skating pond, a fishing pond, and 700 people who knew who we all were and where we were every minute. I had a shepherd dog, Mac, who died a tragic death, shot because someone thought his foaming-at-the-mouth fear of a thunderstorm meant he had rabies. As an adult, I had no dogs until I settled down. After college (two miserable years at Trenton State Teachers College and two happy ones at Fairleigh Dickinson College), I taught elementary school for a few miserable years, then moved to Camden, New Jersey and landed a job as a typist-clerk at the Philadelpha Bulletin. When my boss discovered I had difficulty typing up circulation figures with twelve carbons, I was fired and found another job writing copy for a paternalistic insurance company that offered a low salary and delicious free lunch. One of the printers had the magical ability to square up a stack of paper into a perfect cube. Eventually I moved to a studio apartment on Irving Place in New York City, and, after a few months of writing copy for a textbook company, went on to free-lance as a writer of anything anyone would pay me for. In 1967, I moved to Los Angeles, where I was advertising manager for a publishing company. Then the west coast was a mecca for writers and adventurers. Within a couple of years, I visited a Malibu beach house, fell in love (long-distance) with Bob Dylan, met Thomas Pynchon (he wouldn't remember it), and saw Hair. In 1972, I returned to free-lancing, moved south, and found my first dog, Puppy, a mixed breed who looked something like a fox. (To show you how inappropriate Puppy's name became, I'll tell you this: Puppy died at age 17.) I wrote articles for Irving Wallace and his son, David Wallichinsky (People's Almanac and Book of Lists), and did other wonderful things I won't mention here. With Carol Orsag Madigan, I wrote several books. A desire to delve more deeply into ideas finally drove me to graduate school in 1981. My dissertation focused on an order of 17th and 18th century French nuns so I had to spend a happy year in France doing research. During that year, while not in the archives, I drank local wine with fellow historians and traveled the country with Puppy, who had far less trouble than I did communicating with the French. Now, I teach history part-time at California State University, San Marcos, spend time with Louis and the other animals, and write the books I have always wanted to write but never had the time for. 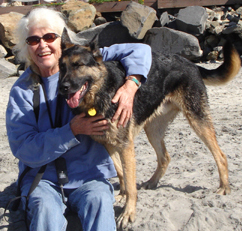