There have been many imitators, but only Jackie Collins can tell you what really goes on in the fastest lane of all. From Beverly Hills bedrooms to a raunchy prowl along the streets of Hollywood; from glittering rock parties and concerts to stretch limos and the mansions of the power brokers — Jackie Collins chronicles the real truth from the inside looking out.

Jackie Collins has been called a “raunchy moralist” by the late director Louis Malle and “Hollywood’s own Marcel Proust” by Vanity Fair magazine. With over 400 million copies of her books sold in more than 40 countries, and with some twenty-eight New York Times bestsellers to her credit, Jackie Collins is one of the world’s top-selling novelists. She is known for giving her readers an unrivaled insider’s knowledge of Hollywood and the glamorous lives and loves of the rich, famous, and infamous! “I write about real people in disguise,” she says. “If anything, my characters are toned down — the truth is much more bizarre.”

Jackie Collins started writing as a teenager, making up steamy stories her schoolmates paid to devour. Her first book, “The World is Full of Married Men,” became a sensational bestseller because of its open sexuality and the way it dealt honestly with the double standard. After that came “The Stud,” “Sinners,” “The Love Killers,” “The World is Full of Divorced Women,” “The Bitch,” “Lovers And Gamblers,” “Chances,” and then the international sensation, “Hollywood Wives” — a #1 New York Times bestseller, which was made into one of ABC’s highest-rated miniseries starring Anthony Hopkins and Candice Bergen.

“The Stud,” “The World is Full of Married Men,” and “The Bitch” were also filmed-this time for the big screen. And Jackie wrote an original movie, Yesterday’s Hero, starring Ian McShane and Suzanne Somers.

Readers couldn’t wait to race through “Lucky,” her next book — a sequel to “Chances” — and the story of Lucky Santangelo, an incredibly beautiful, strong woman, another New York Times number one. Oprah had one word for the book “Lucky,” and that was — “Hot!”

Next came the bad boys of Hollywood in the steamy “Hollywood Husbands” — a novel which kept everyone guessing the identities of the true-to-life Hollywood characters.

Jackie then wrote “Rock Star” — the story of three rock superstars and their rise to the top, followed by the long-awaited sequel to “Chances” and “Lucky” — “Lady Boss” - tracking the further adventures of the wild and powerful Lucky Santangelo as she takes control of a Hollywood studio.

Both “Lucky” and “Chances” were written and adapted for NBC television by Jackie, who also executive produced the highly successful six-hour miniseries Lucky/Chances, starring Nicollete Sheridan and Sandra Bullock.

Jackie recently completed work on a play — “Hollywood Lies.” And after producing a direct-to-DVD movie last year, Paris Connections, she is currently working on a new novel “The Power Trip,” and on her autobiography “Reform School or Hollywood.”

Jackie is also putting together “The Lucky Santangelo Cook Book,” and a coffee table book, “Hollywood Snaps,” filled with celebrity photos she has taken over the years.

Jackie lives in L.A. and calls herself a popular culture junkie. Her hobbies are music — everything from soul to rap, taking photographs, and visiting exotic locations so that she can write about them later. Jackie firmly believes that the truth is always much stranger than fiction. 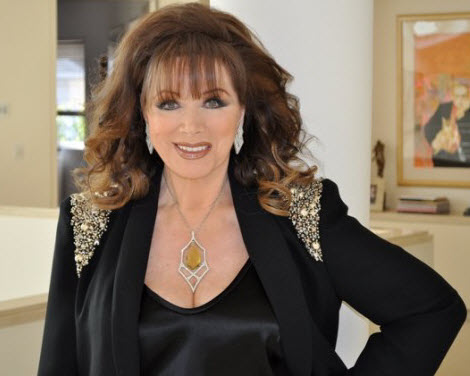