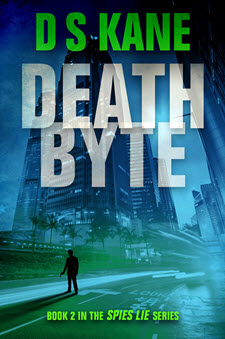 DeathByte Knocks It Out of the Park!

Booknook.biz client D.S. Kane must be one of the happiest guys around--not only did Baksheesh, Book 5 of the Spies Lie Series, kick up to #47 in the Amazon Thrillers/Assassintaions genre, but this week D.S. (not his real name--read on to find out why!) learned that DeathByte, Book 2 in the same series, assassinated the competition by rocketing up to #1--yes, number 1--on TWO of the Amazon Bestseller lists, and number 23 overall. Yup:  23rd on the overall list, which ain't bad, boys and girls.

Why is D.S. So Successful at Espionage Thrillers?

For all those naysayers out there still whingeing that a self-publishing author can't compete with the big boys of BPH (Big Publishing Houses), D.S., amongst others, is quite simply proving them wrong.  But why? Why is Dave just so darn good at his storytelling?  At spinning tales out of thin air? At getting inside the minds of intelligence operatives, covert agents, double-agents and traitors?

Yes, that's right.  D.S. is a retired itelligence service undercover operative.  ("I'm Kane, D.S. Kane...").  If you want to hear what it's really like to be a spy, D.S interviewed with Marty Nemko of NPR.org.  You can listen to this fascinating interview here:  http://kalw.org/post/work-marty-nemko-whats-it-really-be-spy , during which D.S. discusses

If you love a terrific spy tale, mixing espionage, computer-theft, hacking, and a page-turner that you can't put down, try DeathByte for yourself.  I highly recommend that you consider starting with Book One of the Spies Lie series, which is Bloodridge.  Bloodridge mixes love, sex, Mossad, and betrayal into a tight, action-packed thriller that shouldn't be missed.